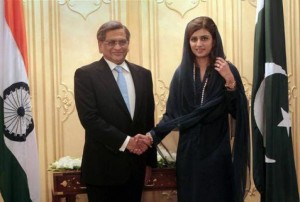 During the visit of India’s External Affairs Minister S M Krishna to Pakistan, Islamabad and New Delhi signed on September 9, this year, an agreement of liberalised visa regime and a memorandum of understanding on cultural exchanges, in addition to agreeing on new cross-Line of Control (LoC) Confidence Building Measures (CBMs) related to trade and travel. Both the countries also agreed to enhance air and sea travel routes besides restoring Mumbai-Karachi sea link.

Khar stated that they discussed all the outstanding issues such as terrorism, Kashmir, Siachen, Sir Creek, Wullar Barrage, water etc.

Earlier on his arrival, quite contrary to his positive statement, S M Krishna warned that in case of Mumbai-like incident; relations between the two countries could lapse. Obviously Pakistan needed to do more on this front.

Indian shrewd diplomacy could be judged from the fact that its rulers availed various crises so as to suspend the process of Pak-India talks. For example, in 2002, under the pretension of terrorist attack on the Indian parliament, New Delhi postponed the process of dialogue. Again, in 2008, India suspended the ‘composite dialogue’ under the pretext of Mumbai terror attacks which were in fact, arranged by its secret agency RAW in connivance with Indian home-grown terrorists.

India and Pakistan had resumed the new phase of talks in March, 2009 which were the first structured bilateral talks. But every time, prime ministers and foreign ministers of Pakistan and India have ended their meetings with issuance of positive notes, and vowed that their parleys would pave the way for the settlement of real issues, but the same failed without producing tangible results due to Indian hidden diplomacy. In this context, Pakistan’s former Foreign Minister Shah Mehmood Qureshi had rightly stated that India “was not mentally ready for talks, as it wanted to discuss only selective issues.”

Notably, on November 10, 2011, the then Prime Minister Gilani and Prime Minister Manmohan Singh met on the sidelines of the SAARC summit in Maldives. Singh pointed out, “The time has come to write a new chapter in the history of our countries.” Both the rulers agreed to improve their bilateral relations especially in trade, and also stated that all the issues were discussed. Quite contrarily, two days after that meeting, Manmohan Singh stated, “I left Gilani in no doubt that if public opinion in India is not satisfied that justice is being done to those responsible to the barbarous attack of Mumbai, it would not be possible to move forward with the peace process.”

In Maldives, Pakistan’s Interior Minister Rehman Malik said about Pakistan’s position that Ajmal Kasab, the lone survivor of the 26/11 terror-incident is a “non-state actor…should be hanged, so should perpetrators of the Samjhauta Express blast.” In this respect, the Judicial Commission of Pakistan visited India, but it could not succeed in collecting evidence about Mumbai-related suspects due to non-cooperation of the Indian concerned officials.

As regards the Mumbai mayhem, while fully cooperating with New Delhi, Pakistan had took action against the banned organisations, Lashkar-e-Taiba (LeT) and Jamaat-ud-Dawah (JuD) by lodging FIR against some suspected persons, and also detained many individuals for investigation. But Lahore High Court had released Hafiz Saeel on bail, saying that there was no evidence agianst him about the Mumbai catastrophe.

It is mentionable that interior secretaries of Pakistan and India talked at Islamabad in May, this year, but Indian Home Secretary RK Singh failed to produce any solid evidence about Hafiz Saeed’s involvement in the Mumbai terror attacks. On the other side, Rehman Malik confirmed that RAW was involved in the Samjhota Express incident.

While the true story of the Mumbai carnage had been proved last year, when a day after the Indian media exposed the name of the terrorist, Wazhul Qamar Khan  whose name was included in the list of 50 alleged terrorists given to Pakistan in March, 2011. But Wazhur Qamar “is living in the suburbs of Mumbai with his family” and “is regularly reports to a court that gave him bail” as reported by The Times of India. In this regard, Indian Home Minister P. Chidambaram admitted that what the media described an embarrassing lapse—for preparing the list was true. Besides, reports suggest that another most-wanted culprit, Feroz Abdul Khan who is supposed to be hiding in Pakistan has also been found out in India.

Notably, recently, Pakistan’s President Zardari and P.M Singh met on the sidelines of the NAM Summit in Tehran during which Singh repeatedly said that expeditious conclusion of the Mumbai terror attack trial in Pakistan would be a major measure in bilateral relations. Besides, he failed to give any definite date for his promised visit to Pakistan.

In fact, India is not serious in resolving real issues with Pakistan like Sir Creek; Siachen, Wullar Barrage, Water and Kashmir. It is only interested in promotion of trade, friendly exchanges, tourism, relaxation of visas etc. because these favour Indian big economy.

While taking positive steps, Islambad already signed a number of trade agreemens with New Delhi, which allowed India exports of mutltiple items across the Wagah border. It also granted India Most Favoured Nation status, which permits trade in almost everything. On the other hand, New Delhi has allowed investments by Pakistanis in India.

However, like the past such meetings, present one has created only wishful thinking among the people of the two countries as New Delhi is playing double game by promoting ties with Islamabad in other fields because it has locked its side in Mumbai terror attacks, which have continuously been employing by its leaders and diplomats to distract attention from the solution of key disputes.