Massacre and Harassment in Kashmir 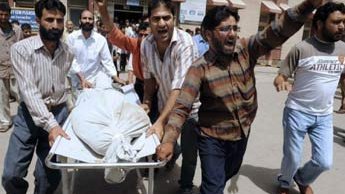 In the modern era, various forms of state terrorism continue by the Israeli armed forces on the Palestinians. While with the backing of Burmese military regime and the covert assistance of Hindus, recent bloodshed of the minority Rohingya Muslim community at the hands of the Rakhine extremist Buddhists in Burma (Myanmar) presents another such example. Similarly, during the Bosnian War (1992–1995), Serb forces slaughtered more than 10,000 Muslims in Bosnia and Herzegovina and buried them in the unamed mass graves. That genocide was repeated in Kosovo where several men and women were murdered.

While, these atrocities are still fresh in the minds of every Muslim, but with the official backing of the government, massacre and harassment of Muslims by the Indian military including paramilitary troops in the Indian-held Kashmir has become a permanent feature.

In this regard, instead of granting the people their genuine right of self-determination and holding plebiscite in the controlled territories of Kashmir in accordance with the UN resolutions, various sorts of state terrorism have become part of a deliberate campaign by the Indian army against Muslim Kashmiris, especially since 1989. It has manifested in brutal tactics such as crackdowns, curfews, illegal detentions, massacre, targeted killings, sieges, burning the houses, torture, disappearances, rape, breaking the legs, molestation of Muslim women and killing of persons through fake encounter.

In this respect, in its report released on October 13, 2012 about detentions under the Jammu and Kashmir Public Safety Act (PSA) 1978, Amnesty International disclosed under the title, “PSA Still a Lawless Law” that despite pressure on Indian government, the PSA has not been reviewed and amended. Therefore, new records are being made by Indian law-enforcing agencies and security forces in human rights violations in the Indian occupied Kashmir.

In its previous report, Amnesty International has pointed out: “The Indian government’s disregard for human rights in Jammu and Kashmir means that in practice people reportedly died in custody and that the whereabouts of the disappeared persons continue to be unknown…government forces continue to commit serious violations of humanitarian law…the Muslim majority population in the Kashmir Valley suffers from the repressive tactics of the security forces. Under the Jammu and Kashmir Disturbed Areas Act, and the Armed Forces (Jammu and Kashmir) Special Powers Act and Public Safety Act, security forces personnel have extraordinary powers to shoot suspected lawbreakers, and to destroy structures suspected of harboring militants or arms.”

Notably, after visiting more than 50 villages, similarly Citizen’s Council of Justice (CCJ) published a report in Srinager in September, 2012 on human rights violations in the Indian controlled Kashmir. On the basis of its survey, research and analysis, the CCJ report under the caption, “Atrocity and Suffering” revealed that a total of 502 people were either murdered or enforcedly disappeared, 2048 individuals were physically tortured, 6888 were subjected to forced labour and 40 people were killed in custody by Indian Security Forces. 234 Mosques and 700 civilian properties worth 103.8 crores were destroyed in the garb of anti-Mujahideen operations, while after being released from jails freedom fighters, faced different detention periods.

Over the two decades of violence in Jammu and Kashmir, Human Rights Watch has documented several failures to ensure protection of human rights. It has called for the repeal of those laws which provide the armed forces with extraordinary powers to search, detain, and use lethal force, leading to numerous human rights violations. They also provide immunity for security forces—their prosecutions, even where the facts are well established, are rare.

In the recent past, Kashmir Quarterly also reported, “Indian Forces killed a number of citizens, torched mosques, shops and houses in various parts of the valley. As a result, there were protest demonstrations in many cities. Troops desecrated the central Srinagar mosque and tortured worshippers whom they found inside.”

It is of particular attention that in 2008, a rights group reported unmarked graves in 55 villages across the northern regions of Baramulla, Bandipore and Handwara. Then researchers and other groups reported finding thousands of single and mass graves without markers. In this context, in the last few years, rights groups discovered nearly 3,000 unnamed graves in the various districts of Kashmir.

It is mentionable that in August, 2011, Indian Jammu and Kashmir State Human Rights Commission (SHRC) officially acknowledged in its report that innocent civilians killed in the two-decade conflict have been buried in unmarked graves. The report indicated 2,156 unidentified bodies which were found in mass graves in various regions of the Indian-held Kashmir. Notably, foreign sources and human rights organisations have disclosed that unnamed graves include those innocent persons, killed by the Indian military and paramilitary troops in the fake encounters including those who were tortured to death by the Indian secret agency RAW.

Recently, China’s leading News Agency Xinhua has unearthed more gruesome details on world-stunning unmarked graves in Poonch of the Indian occupied Kashmir. It pointed out the statement of Sofi Aziz Joo, caretaker of a graveyard as saying, “Police and Army used to bring those bodies and direct me to bury them. The bodies were usually bullet-ridden, mutilated, faces disfigured and sometimes without limbs and heads.”

While, Association of Parents of Disappeared Persons (APDP) and rights groups have stated that more than 10,000 people have disappeared, accusing government forces of staging fake gun battles to cover up killings. They also revealed that suspected persons had been arrested and were murdered through arbitrary executions, and then buried in unmarked graves.

Besides, on June 28, 2010, BBC reported, “three men went missing in Indian-administered Kashmir in April…but their bodies were discovered near the Line of Control…a senior officer of the Indian army had kidnapped them by offering them jobs as porters. The troops later informed the police that they had killed three militants. Kashmir’s law minister, Ali Mohammad Sagar says there have been several proven cases of fake encounters in the past 20 years.”

BBC explained, “There are hardliners in the Indian Army and intelligence agencies, who think that by raising the bogey of infiltration and gun battles near the border they can create terror among people and also put pressure on Pakistan.”

It seems that non-condemnation of Indian massive human rights violations and non-interference for the seettlement of this issue by the so-called civilized international community, especially the US have further encouraged New Delhi to keep on going with its atrocities on the armless Kashmiri masses. Ignorence of the dipute by them involves the risk of nuclear war between Pakistan and India.

Indian authorities are not willing to talk with Kashmiri people on political grounds. New Delhi has reached a conclusion that only bullet is the right way of dealing with them. Surprisingly, Indian successive governments are trying to ignore the dynamics of the freedom movement of Kashmiris to maintain their alien rule.

However, despite the employment of various forms of massacre and harassment in the Indian occupied Kashmir, the war of liberation by the Kashmiri people will continue until they get their legitimate right of self-determination. If New Delhi could not suppress the movement in the past, it could also not do so in present and future.