Mullah Fazlullah hides in Afghanistan; U.S. military have other priorities

Malala Yousafzai sits up in her hospital bed with her father, Ziauddin, and her two younger brothers, Atal Khan, right, and Khushal Khan.

Mullah has haven, as U.S. Forces aim at other threats

The Taliban leader who sparked international outrage by ordering the attack on a Pakistani schoolgirl last month has escaped retribution by hiding in a section of eastern Afghanistan where U.S. forces are already spread thin and focused on other targets, according to U.S. officials.

U.S. military and intelligence officials said that Mullah Fazlullah, the mastermind of the attack on 15-year-old Malala Yousafzai, operates out a region adjoining Pakistan where several hundred U.S. troops are stationed. But they said finding Fazlullah is not a priority because he is not affiliated with al-Qaeda or with insurgents targeting U.S. and Afghan interests.

“Our guys just aren’t tracking him,” a senior Special Operations official said. “He is viewed as an ‘other-side-of-the-border’ problem.”

When asked if Fazlullah was a priority, a senior intelligence official responded, “Not with so many other potential targets” in Afghanistan.

Fazlullah’s relative safety reflects a larger trend in the difficult terrain along both sides of the Afghan-Pakistan border. Plenty of attention has been focused on militants attacking U.S. and Afghan troops from havens inside Pakistan. But officials said extremists from Pakistan also have managed to evade the Pakistani army and CIA drones by finding sanctuary in remote parts of Afghanistan.

“The FATA is difficult [for insurgents] because there are drone strikes,” said a congressional staffer, using the acronym for semi-autonomous Federally Administered Tribal Areas on the Pakistan side of the border. “It’s easier to be in eastern Afghanistan where there’s no real presence” of U.S. troops.

All three people spoke on condition they not be named because they were not authorized to speak for attribution.

Tom Collins, a spokesman for the International Security Assistance Force in Kabul, said: “ISAF is maintaining steady pressure on insurgents throughout Afghanistan. Mullah Fazlullah, like many insurgents who are transitory, remains a person of interest. If we receive actionable intelligence that he is in Afghanistan, we will attempt to take him off the battlefield.”

Collecting accurate intelligence is the most difficult step in locating and attacking enemy forces. In Konar and Nuristan, the two provinces where Fazlullah is believed to be hiding, the problem is tougher because ISAF advisers believe the Afghan army is allowing the Pakistani Taliban to operate in retribution for Pakistan not doing enough to stop cross-border rocket attacks and armed infiltrators using Pakistan as a haven.

Not all Pakistani militants escape attack inside Afghanistan. On Aug. 25, one of the group’s senior leaders was killed in a NATO air strike. ISAF said the leader, Mullah Dadullah, was helping fighters who had attacked Afghan and coalition forces and had close ties with al-Qaeda. Fazlullah, on the other hand, remains focused on Pakistan and he is not believed to have ties to al-Qaeda or attacks on coalition or Afghan forces.

The Pakistan government has criticized both the United States and Afghanistan for not trying harder to capture or kill Pakistani Taliban in Afghanistan. Washington, for its part, has long accused Pakistan of refusing to take on the Haqqani network, which uses northwestern Pakistan as its base for attacks against coalition forces in Afghanistan.

More aggressively targeting the Pakistan Taliban would divert military resources, particularly drones and other surveillance capacity, to the region at a time when personnel and assets are being reduced in anticipation of the end of combat operations in 2014.

But some experts say that reducing the threat to Pakistan’s stability from its homegrown extremists should be a vital goal.

“I think it is in the U.S. interest to go after the threats to Pakistan because our policy and long-term interests are to have a stable Pakistan,” said Wendy Chamberlin, a former U.S. ambassador to Pakistan and now president of the Middle East Institute, a Washington think tank.

The senior intelligence official said U.S. offers of additional training and intelligence support have been turned down by Islamabad, where suspicions of U.S. motives run deep.

“We could share more,” the senior intelligence official said. “They actually aren’t opening up as much as we would like them to.”

“Both sides have really been caught up for a long time in the blame game,” he said.

The number of insurgents taking refuge in the border region has increased in recent years, particularly on the Afghan side, according to the congressional staffer, who follows the region closely.

Besides small numbers of alQaeda fighters, the militant population includes the Islamic Movement of Uzbekistan, Afghan and Pakistani Taliban and a growing number of Punjabi extremists involved in the Kashmir border conflict with India, according to U.S. officials and outside experts. 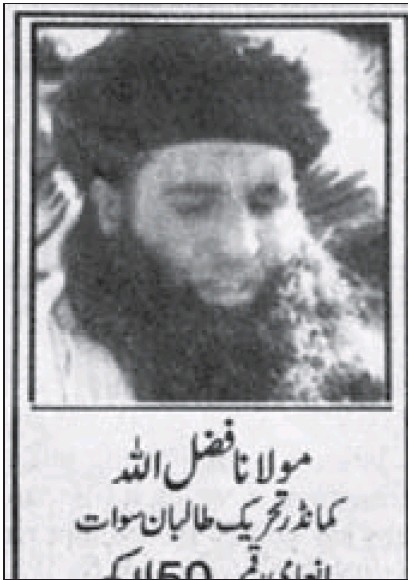 A U.S. defense official familiar with the tribal structure of the region said Fazlullah has found sanctuary in Konar and Nuristan through personal ties with tribal leaders. His fighters have launched numerous attacks across the border that U.S. defense officials say are intended to raise Fazlullah’s profile and make the Pakistani army look weak.

In June, about 100 of Fazlullah’s fighters crossed the border into Pakistan and beheaded 17 soldiers. A year earlier, they had captured 16 Pakistani policemen and executed them by firing squad.

But it was the attempt to assassinate 15-year-old Malala Yousafzai on Oct. 9 that pushed Fazlullah into the international limelight.

Since she was 11, Malala had been an outspoken champion of the right of girls to attend school. Last month, she was on her school van when gunmen boarded the bus and shot her twice at close range. Two classmates were also wounded. All three survived and Malala is recuperating in Britain.

The Pakistani Taliban claimed responsibility for the attack and U.S. intelligence officials say evidence points to Fazlullah as the person who ordered it.

The shooting galvanized Pakistan and many other Muslim countries. Muslim clerics in Pakistan denounced the violence and thousands protested in Pakistan. Perhaps feeling pressure from a worldwide condemnation, the Pakistani Taliban released a seven-page justification for the shooting.

But condemnation from Washington has been purposefully muted. Although Secretary of State Hillary Rodham Clinton criticized the attackers, others have not done so for fear of a backlash from Pakistan, where conspiracies about U.S. involvement in the country are rife and anti-American sentiment high.

Pakistani authorities have arrested at least 30 people for questioning, but say they have not yet found the shooters or their leader, Fazlullah.