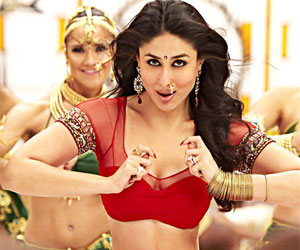 12:11 Pm=> But hang in there… One of the goons get caught… And upon intervention spurts out the name of his employer… Armaan’s friend… Sanjay…

12:09 Pm=> Wow… What a Sequence… So Arman’s friends employ some goons who case down and ultimately kills Themur… But in the meantime, he hands over the bag full of money to his friend… So now… Our main guy Themur is dead

12:02 Pm=> So all focus now shifts to Themur… Shashi’s sidekick… He meets Arman’s friend and takes the remaining money that was meant for Shashi. And even as he tried to make a break for it with the money… Another awesome song breaks out

11:50 Am=> But hang on… There’s no naughtiness going on! Turns out our big tough guy just wants a friend! He just wants to talk!! Sure everyone says that at the beginning right

11:48 Am=> Rani suspects Aamir of having an affair… But not physical, though… Mentally he surely is trying to find peace outside his marriage… And his dangerous liaisons with Kareena Kapoor has finally got the better of him… And they walk into a hotel room

11:46 Am=> U can feel the pulse fall and the tension is not there… There’s still a suspense… But the movie is not going forward

11:44 Am=> And Aamir storms into their neighbors house… And find Rani there… What follows is an emotional outburst from Rani, that Aamir is never available for her… And that drives her to other methods of finding peace…

11:36 Am=> So hang on… Turns out Nikhil is not dead!! He’s alive but hasn’t talked since the accident and is paralysed

11:32 Am=> And Kareena met with Armaan before… But with Nikhil, Armaan and a third person… The name of whom she doesn’t know… Now joins this third person? Is this Armaan’s friend who is receiving these calls?

11:30 Am=> More clarity and more vagueness follows! Kareena tells Aamir that Armaan’s friend Nikhil, who was referred to earlier as having died in an accident, used to be a client of Kareena…

11:24 Am=> Is it a case of fatal attraction??? Aamir once again finds Kareena and follows her… Even as the song goes on in the background

11:21 Am=> Post interval the movie seems to have lost just a little bit of steam… It’s a little emotional… But very much tied to what’s happening in the movie… Aamir and Rani are trying to come to terms with life without their child, and their marriage suffering because of it… Another of those beautiful posh songs follow…

11:17 Am=> And now we’re introduced to a new death… A new guy called Nikhil… Now who is this Nikhil guy? Apparently a friend of Armaan… But another loose thread out there…

11:14 Am=> Now Shashi’s side kick, themur, and Kareena give Armaan’s friend a call saying they are ready for the drop off on behalf of the now deceased Shashi

11:11 Am=> And Shashi’s side kick gets hold of a CD, that has Armaan, Shashi and Kareena walking in a mall together…

11:09 Am=> So looks like a previously trivial character, the dead hero Armaan’s friend, is the one arranging the drop off of money and on collaboration with Shashi…

10:58 Am=> What a way to break into an interval… Now looks as though Kareena is also involved in the whole mess

10:54 Am=> And there’s one more death… This time it’s Shashi… The one everyone is looking for… But who killed Shashi now?

10:52 Am=> And she takes help of her crazy psycho neighbor, who goes into a trance and communicates with the dead Karan… And writes a message to Rani and Aamir through her

10:46 Am You can feel a dip in the pace of things but U can also feel the intensity grow…

10:44 Am=> And Aamir is steady on in his talaash… His interaction with Kareena is getting dangerously sexy and provocative… Is Kareena playing a double game?

10:42 Am=> The movie goes ahead in a frenetic pace with our bad guy Shashi is missing from the picture… As the police tries to find him, his right hand man is taken into custody… Though he doesn’t know much, he gets hold of something when he takes Shashi’s old SIM card and listens to a call that was meant for Shashi… There’s a drop off happening tomorrow night… And it’s anybody’s guess who’s going to get caught

10:36 Am=>The song is laced with powerful emotions of Aamir and Rani in happier days when their kid was with them and they were a loving family

10:33 Am=> What screenplay!! Excellent pace!!… Awesome!! Gripping, fast, and thrilling… U can see the suspense build… Just on time, an apt song frees up the tension a little

10:32 Am=> One thing leads to another and the investigation goes on on full swing. In the meanwhile, Rani is trying to come to terms with the loss of her son… and is seeing a psychologist to realize what happened

10:29 Am=> On the road, Aamir comes across Kareena, who in the process of trying to get a new client tells him that she has a setup with the receptionist at hotel Ledo… And Aamir is interested

10:23 Am=>Even as Aamir storms away in anger and frustration, he’s reminded of his son Karan, and recounts the paying accident that killed him… But there’s a twist… Did they even find Karan’s body?

10:21 AM=> And now the neighbor… Pheni.., is back! And MAN, does she throw in a curve ball… She says that she has a message from Karan, who appears to be Aamir and Rani’s deceased son… And Pheni apparently has a message from their dead son Karan!!

10:18 AM=> Turns out the accountant of Mr Armaan had given a bag full of money… On further investigations, this has happened a couple of times before, too… Giving bags of money to others… And as they head to a local hotel to find their suspect, he already left the job some time back

10:15 AM=> Seems as though Aamir and Rani have just moved into a new place… And they are still unpacking… We’re introduced to an intriguing character Ms. Mistry… Who’s their new neighbor… As Rani makes tea, Mistry does a little snooping around and pulls out a photo of a child, and she says: “It’s good to see you Karan”!

10:11 AM=> Our third protagonist Rani Mukherjee is a housewife, with domestic appearance… It’s evident that she and her husband Aamir have issues in their marriage

10:07 AM=> And Kareena Kapoor makes her entrance… Glamorous alright, but as a prostitute… Her pimp, Shashi bhai is a nervous man… He’s changed his phone number, packed his bags and is taking off to another town.

10:04 AM=> Dal mein kuch kala hain… Armaan was driving alone… Usually he’s always accompanied by his driver and spot boy, both of whom were missing this fateful night.

10:02 AM=> Turns out the guy inside the car was movie star Armaan Khan… Even as the family comes to terms with what’s happened, the police starts their investigations.

10:00 AM=> A more dramatic start is hard to imagine…. A car crashes and plunges into the sea. Police arrives and with it out the hero – Aamir Khan.