US ready to attack Iran, says envoy to Israel 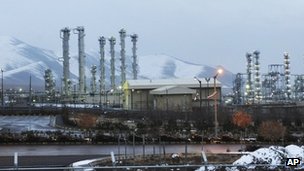 The US has plans in place to attack Iran if other measures fail to stop it developing nuclear weapons, Washington’s envoy to Israel says.

Dan Shapiro said the US hoped diplomacy and sanctions would persuade Iran to alter its nuclear programme, but a military option was “ready”.

US President Obama has previously said military action has not been ruled out.

The US and its allies say Iran is developing a nuclear bomb, an accusation Tehran denies.

Talks between Iran and six world powers are due to resume in Baghdad on 23 May.

Mr Shapiro made his comments to the Israel Bar Association on Tuesday, a recording of which was later obtained by the Associated Press news agency.

“It would be preferable to resolve this diplomatically through the use of pressure than to use military force,” Mr Shapiro said.

“But that doesn’t mean that option is not fully available. Not just available, but it’s ready. The necessary planning has been done to ensure that it’s ready.”

Both Israel and the US have said they consider military force a last resort to stop Iran using its uranium enrichment programme to make a weapon.

Israel, which feels threatened by the prospect of a nuclear-armed Iran, has hinted it could launch a pre-emptive strike.

The BBC’s Iran correspondent, James Reynolds, says Mr Shapiro’s remarks go further than previous comments by President Barack Obama that all options are on the table, including military action.

Although aimed at an Israeli audience, the ambassador’s comments will not go unnoticed in other capitals, including Tehran, our correspondent says.
Sanctions

Six world powers – the US, Britain, France, Russia, China and Germany – are trying to persuade Tehran to reduce uranium enrichment and open up its nuclear facilities to inspectors from the International Atomic Energy Agency (IAEA).

Fresh talks opened in Istanbul in April – the first for 15 months – and EU foreign policy chief Catherine Ashton described them as “constructive and useful”.

The EU, the US and the UN have all imposed sanctions on Iran over its nuclear programme.

In the past, US officials have stressed the regional instability that would result from any attack on Iran.

In March, Mr Obama said there was “still a window that allows for a diplomatic resolution”.

He warned there was “too much loose talk of war” and that it was playing into Iran’s hands. However, he stressed that all options remained open.

Tehran insists it is enriching uranium to produce medical isotopes and fuel for nuclear reactors.