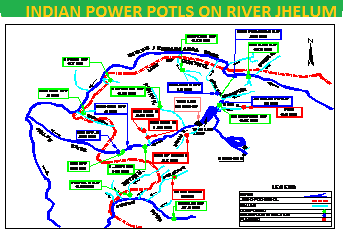 On 1ST September 2012, the International Court of Arbitration (ICA) constituted in the matter of the Indus Waters Kishenganga Arbitration (Pakistan v. India) has concluded a two-week hearing on the merits at the Peace Palace in The Hague. Earlier, in the case of Baglihar Hdro Project, the court has asked India to redesign and carryout necessary amendments for removing three out of four technical objections raised by Pakistan.

Another disputed Kishenganga Hdro-Electric Project (KHEP) is located on Kishenganga River, (Neelum River) near Kanzalwan. 103 M high dam will divert the water of Kishenganga to Wular Lake through a 22 km tunnel. The project would be having electricity generation capacity of 330 MW.

Pakistan and India though concluded a treaty on regulation of rivers of Indus Water Basin in 1960 but India normally shown reluctance in implementation of agreement.  The water conflicts awakened again when India started constructing the hydro projects and reservoirs without the consent of Pakistan. India has planned construction of 72 water power projects of different magnitude on rivers/Nullahs of Indian Occupied Kashmir (IOK).

In doing so, it is in the process of diverting millions of acre feet of dead and live storage water from IOK to Rajistan, which will also be used to produce hydropower. She has already started of construction of a mega task “Interlinking River Project”. According to the experts, the undertaking of project would likely to change the ecology of South Asia and would also cause adverse effects on the environment.  Recently, Indian Supreme Court has urged that the interlinking of the rivers be accelerated and implemented by 2016. Indian Prime Minister subsequently set up of a Task Force to consider the modalities of implementing the project.  Though, the interlinking of rivers has been presented by the Indian Government as a major initiative towards meeting the future water problems but overall would cause devastating effects in rivers delta of Bangladesh, India and Pakistan. Estimated to cost Rs. 5,60,00,00 million, the project envisages 30 links across Himalayan and peninsular rivers. The idea behind this is based on the fact that an enormous amount of water from rivers flows into the sea. It is envisaged that if this is prevented, and water transferred from rivers to water-deficit areas, there will be adequate supply for everyone in every part of the country.

The estimated cost is about 50 times more than the total allocation for the ongoing water resource development projects in the Tenth Plan. There are talks of opening doors to private investors; in that case traditional rights of people over water resources will be affected. The environmental and human costs of the project are going to be colossal. These will include, disturbance to pristine biodiversity rich areas, disruption of tribal lives, changes in river morphology and water quality, submergence of forests and agricultural lands etc. Connecting the Himalayan Rivers with the peninsular rivers through some 40,000 km long inland waterways will cause massive human displacement. The large network of dams and canals will also alter the natural drainage such that occasional flooding and water logging will inundate millions of hectares of agricultural land, the project may alter the geography of the country significantly. Inter linking of livers may disrupt the entire hydrological cycle by stopping the rivers from performing their ecological function before reaching the oceans.

Also, given changing global climate, what seems like surplus water today, may not even be available a few years down the line. There is no provision for any mechanism to deal with matters concerning inter-basin transfers.

Anyhow, regarding Indus Water Basin connecting rivers under inter river linking system and construction of hydro-electric projects constitute a violation of the IWT (Indus Water Treaty) which provides for the generation of hydropower on “run-of-the river” water only, with no live storage-not even in normal terms. Although Indian government contends that these projects are only on the “run of the river”, but practically would be having full control over the water storage. In this connection, India has already attained the capability of the controlling and manipulations of water for 28 days of water of River Chennab.

Anyway, focusing on current issue of Kishenganga dispute, it would not be wrong in stating that IWT has resolved the issue of Wullar Barrage but was not able to give any way-out over Kishenganga Conflict. Pakistan had launched a complaint in the court of arbitration that Indian bid to build Kishenganga dam was violation of World Bank brokered IWT of 1960.  In this connection, on September 23, 2011 the court issued an interim order, restraining India from going ahead with the controversial hydro power project over river Kishenganga in Gurez Valley of IHK. ICA was in the opinion that structure over River Neelum/Kishenganga that may affect the flow of water downstream.

With the ICA’s stay order, Pakistan will have the time to expedite the construction of large reservoirs so that India does not claim the right to use water Pakistan is not constructing any dams. However, Indian efforts are to make IWT ineffective and most of Indian scholars believe in re-imagining of water treaty.

Pakistan has initiated this arbitration with India under Article IX and Annexure G of the IWT, an international agreement concluded by India and Pakistan in 1960 which regulates the use by the two States of the Indus system of rivers. In these proceedings, Pakistan places two matters for determination by the Court of Arbitration:

First reveals, “ Whether India’s proposed diversion of the river Kishenganga (Neelum) into another Tributary, i.e. the Bonar Madmati Nallah, being one central element of the Kishenganga Project, breaches India’s legal obligations owed to Pakistan under the Treaty, as interpreted and applied in accordance with international law, including India’s obligations under Article III(2) (let flow all the waters of the Western rivers and not permit any interference with those waters) and Article IV(6) (maintenance of natural channels)?”  Second Deliberates: “Whether under the Treaty, India may deplete or bring the reservoir level of a run-of-river Plant below Dead Storage Level (DSL) in any circumstances except in the case of an unforeseen emergency?”

The primary subject of the arbitration is the Kishenganga Hydro-Electric Project (the “KHEP”) currently under construction by India on the Kishenganga/Neelum River, a tributary of the Jhelum River. It is also notable here that KHEP would be in operational condition by 2016, whereas Neelum Jhelum Project would start functioning in 2017.    Pakistan concerns and objections over KHEP are very alarming and serious in nature since completion of KHEP would reduce the flow of water into Pakistan by about 11% in summer and about 27% in winter, which would be contrary to the IWT as the Western rivers and would also damaged already constructed Neelum-Jhelum project. Moreover, Pakistan’s Neelum Valley is likely to dry up and become a desert.  Another issues of would be of the management of sedimentation in the reservoir, India intends to employ drawdown flushing, a technique requiring the depletion of the level in the KHEP reservoir below Dead Storage Level (the Treaty’s definition of this term is reproduced in the annex to this press release). Pakistan very rightly contended that the KHEP’s planned diversion of the waters of the Kishenganga/Neelum, as well as the use of the drawdown flushing technique, both at the KHEP or at other Indian hydro-electric projects that the Treaty regulates, are impermissible under the Indus Waters Treaty. India maintains that both the design and planned mode of operation of the KHEP are fully in conformity with the Treaty.

The dam defiantly will create problems for Pakistan because it will create the shortage in Neelum River. Pakistan has, meanwhile, formalized its objections into six questions, three on the design of the project, two on the diversion of water and one on power houses.   Pakistan raised the objection that about the location of the project and insisted that under the Indus Basin Water Treaty India could not divert Kishenganga water to Wuller barrage, on which it was building an 800 MW hydro-power project. India is under obligation to release as much water downstream as it stores. It is also notable here that it is going to affect the Pakistani Project too which is located 70 km downstream from Kishenganga Project.

In fact, India’s premise that it was already contemplating construction of a hydroelectric project on this tributary of Jhelum River at the time of signing of the treaty opens up the question of intention rather than actual plan or capability at the time. Moreover Indian argument that affect on Pakistan’s Neelum-Jhelum project downstream, can be mitigated by constructing other structures seems to be speculative, preventive and requiring huge additional cost and time. Therefore Pakistan should not agreed to Indian argument is as such not agreeable. The sacristy of water (even for domestic use) will result if Indian KHEP (Kishenganga Hydro Electric Project) is allowed to be implemented. This may even of force migration/displacement of population in AJ&K damaging of agro based economy of Pakistan. In short, the amicable solution of water and territorial conflicts (including Kashmir) between two South Asian nuclear countries needs to be resolved on priority if UN, ICA and super powers are interested to save the globe from future nuclear war.