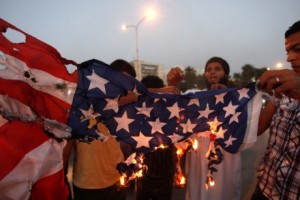 Demonstrations and violence have hit more than 30 Islamic countries by the Muslims who protested against blasphemous US-made film “Innocence of Muslims,” produced by Israeli-American filmmaker Sam Bacile. In Pakistan, a national holiday was announced on September 21 to observe it as Yaum-e-Ishq-e-Rasool (PBUH) against the sacrilegious film. Violent protesters plunged the country into chaos as 30 people were killed in addition to widespread damage to public and private property in nationwide protests. In this regard, the American ambassador in Libya and three of his staff were killed in an attack on the US.

However, it is not the single blasphemous act, in the past too; such anti-Islam activities have been conducted by some elements which not only want to distort the image of Islam, but also seek to create division between the Muslim and Western the worlds.

In this respect, on March 20, 2011, a US evangelical preacher Terry Jones supervised the burning of a copy of the Holy Quran by Pastor Wayne Sapp in a Florida church, while similar sacrilegious act was done by the US troops in Bagram base in Afghanistan. In 2005, caricatures of Holy Prophet (PBUH) published in Danish newspapers sparked deadly protests in Muslim countries. In that context, Al Qaeda claimed responsibility for a suicide attack on Denmark’s embassy in Islamabad in 2008, killing six people, saying it was in revenge for publication of caricatures.

Notably, reprinting of the caricatures about Prophet Muhammad (PBUH) and release of a Dutch film against the Holy Quran in 2008 was also part of the same conspiracy against the Muslims. The film equates Islam with violence, followed by the 9/11 terror attacks inside the US, showing Islamic leaders preaching inflammatory sermons against Jews and Christians. It displayed that Europe is under threat from Islamic beliefs and practices.

Besides, in May, 2010, a competition of the blasphemous drawings about the Prophet Muhammad (PBUH) inspired by an American cartoonist on Facebook including YouTube triggered demonstrations across the Muslim world.

Those who are behind these fanatic entities intend to fulfill their political designs. In these terms, by availing the international phenomena of terrorism, Indo-Israeli lobbies are collectively working in America and other European countries to manipulate the double standards of the west in relation to terrorism and human rights vis-à-vis some Islamic countries. Israel and India are equating the ‘war of independence’ in Kashmir and Palestine with terrorism. If India considers Pakistan as its enemy number one, Israel takes Iran in the same sense particularly due to its nuclear programme which is also negated by the US. However, all these similarities of interest have brought the two countries to follow a common secret diplomacy with the tactical support of Washington, targeting Pakistan, Iran, Syria etc.

Taking cognisance of the growing threat of global terrorism which has been dividing the Western and Islamic nations on cultural and religious lines, American and European governments have already started inter-faith dialogue especially between the Christian and the Muslim nations. But this measure is proving fruitless due to a deliberate anti-Muslim campaign, launched by the Indo-Israeli nexus.

Another regrettable point is that irresponsible attitude of some Indian, Israeli, American and Western politicians has introduced dangerous socio-religious dimension in their societies by equating the “war on terror” with “war on Islam” and acts of Al Qaeda with all the Muslims. Their media have also been contributing to heighten the currents of world politics on similar lines.

It is because of these developments that a greater resentment is being found among the Muslims who think that the US in connivance with the Indo-Israeli lobbies is sponsoring state terrorism, directly or indirectly from Kashmir to Palestine, and from Afghanistan to Somalia.

As a matter of fact, by hurting the feelings of Muslims through the previous anti-Islam activities, and the recent movie, these plotters intend to create a greater resentment among the Muslims against the Western world in general and the United States in particular. During each such occasion, protesters in the Islamic countries raised anti-US slogans, burnt American flags and targeted US embassies and installations. This was especially observed in Pakistan where leaders of the political and religious parties also delivered emotional speeches on this emotional matter.

These blasphemous activities against the religion of Muslims will result in the recruitment of more militants by the terrorist groups. Instead of curbing terrorism, it will cause more terrorism in the volatile countries like Pakistan, Somalia, Yemen etc. Now, this new sacrilegious film has provided the Islamic militants with new ammunition. It is said that Al Qaeda is the winner. If such nefarious acts continue, even moderate Muslims will join the radicals.

Indo-Israel lobbies and US neo-conservative think tanks which are funded by the Zionists and CIA, are secretly staging propaganda against Islam and Muslim countries. With the assistance of fundamentalist Christians and Jews, the recent blasphemous movie against Islam has been produced by them to incite the sentiments of Muslims around the world in order to show to the west that all the Muslims are fanatics and extremists.

Another major aim behind is to unite the Islamic countries against the US-led western countries so that an unending rift could be created among them. So conspirators have been succeeded in their nefarious designs to a greater extent.

Because, US and some European top officials have defended the anti-Islamic cartoons and film under the pretext of freedom of speech.  Critics say that if western democracies have passed laws against anti-Semitism and denials of the holocaust, as to why there is no such law about anti-Islam moves. Nevertheless, it indicates double standards of these liberal and civilised countries which have further encouraged those who want to sabotage the world peace through division.

Most alarming point is that if the anti-Islam activities of the Indo-Israeli lobbies coupled with Jewish and Christian fundamentalists are not being checked by the international community in time, the same will culminate in World War III.