Pakistan: Lal Masjid Back On The Burner 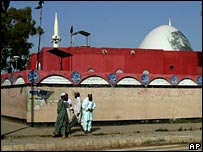 Five and a half years after the bloody saga, the Supreme Court has decided to appoint a one-man commission to look into the events surrounding the Lal Masjid (Red Mosque) operation in 2007. The operation was conducted after the then government and law had shown restraint for nearly eighteen months despite open provocation by vigilantism of the students of the male and female seminaries attached to the mosque.

The seminary for the girls was constructed illegally on government land. In 2006, the government of Pakistan ordered all illegal constructions including mosques and seminaries to be demolished. Since the Lal Masjid seminary for females, Jamia Hafsa had also been targeted for demolition, instead of formally applying for allotment of the land, Maulana Abdul Aziz and his brother Maulana Abdul Rashid Ghazi unleashed the students of both the male and female seminaries, on a jihad to “install virtue and eradicate evil”.

The brothers called for the imposition of Sharia (Islamic religious law) in Pakistan and the overthrow of the Pervez Musharraf’s government. Armed with bamboo staffs, the students of the seminaries launched a campaign of vigilantism, arresting women not dressed in accordance with the Islamic code, ransacked video and music shops;  engaged in violent demonstrations, destruction of property, kidnapping, arson, and armed clashes with authorities. There were even reports of members of Al-Qaeda/Taliban groups being provided shelter in the Lal Masjid compound.

Besides the close proximity of the location of Lal Masjid to Islamabad’s Diplomatic Enclave, government offices and the ISI, there was both domestic and international pressure on the government to take severe action. The straw that broke the camel’s back, was the kidnapping of a number of Chinese officials, operating a massage parlour, on charges of immorality; forcefully occupying and destroying the adjacent children’s library; setting fire to the Ministry of Environment building, torching its vehicles and looting arms and radio equipment from the Rangers’ check-post guarding it.

Law enforcing agencies and the Army’s Special Services Group (SSG) laid siege of the complex from July 3 to July 11, 2007. Latitude was given to the brothers to surrender and also spare the lives of the male and female students being held hostage in the complex. Governmental negotiators Chaudhry Shujaat Hussain and Ijazul Haque, religious scholars and notable personalities like the Imam of Kaaba, conducted parleys to convince the brothers to surrender peacefully. At the failure of the negotiations, the complex was stormed and captured by the SSG.

The conflict resulted in 154 deaths, and 50 militants were captured alive. In retaliation to the assault, pro-Al-Qaeda/Taliban militants along the Afghanistan border declared a 10-month-old peace agreement with the Pakistani Government null and void, triggering insurgency in Waziristan and FATA, unleashing a wave of terrorist attacks all over Pakistan, resulting in the loss of more than 30,000 precious lives.

The surviving brother, Maulana Abdul Aziz, who was arrested while trying to escape, dressed in a Burqa, was ordered to be set free by the court, which also decreed that the government ensure the repair of Lal Masjid and opening it to the faithful, with Maulana Abdul Aziz leading the prayers. A large cache of sophisticated weapons and explosive material used in sabotage and terror attacks was also recovered from the complex and shown to journalists. On July 6, 2008, the first anniversary of the siege, a bomb explosion near the Lal Masjid, killed 18 policemen and a civilian.

Revisiting the operation by a judicial commission raises questions regarding the intent behind it. It was established beyond the shadow of doubt that the prayer leaders were in violation of a number of local laws, including constructing illegal structures, harbouring fugitives and militants, storing illegal weapons, attacking law enforcing agencies, vigilantism and forcefully occupying/destroying government property as well as holding innocent students hostage, using them as human shields and ultimately causing their deaths in the face of the counterattack by the SSG.

The role of the judiciary also comes into question since it was the court that ordered the release of Maulana Abdul Aziz. The failure of the governmental interlocutors also becomes questionable. They were in the process of distancing themselves from the military dictator Musharraf; did they deliberately fail the negotiations to embarrass him for political gains? The conduct of the media too is open to discussion. Public loathing of the vigilantes of the Lal Masjid complex was at its peak prior to the siege.

During the siege, the media assumed the role of self-styled negotiators and provided live TV airtime to the militants, who being wonderful orators, preferred to address the TV viewers directly, rather than the official negotiators. Thus with their skill of eloquence, they managed to sway public opinion in their favour, presenting themselves as martyrs for a just cause. The same public, which was baying for their blood, now inadvertently became their sympathizers, shedding tears for them, condemning the government for severe action. It must also then be investigated whether the free and open but gullible media had overplayed its hand or was acting at the behest of agenda setters and enemies of the state, determined to sow more confusion, despondence and anarchy.

The main characters, who ordered the siege and final assault, President Pervez Musharraf and his Prime Minister Shaukat Aziz are long gone. The law enforcing agencies were only carrying out orders to lay siege and conduct an armed attack. So who would the Commission hold responsible for employing brute force?

To an impartial observer, it appears that in the recent episode of finding the army and its subordinate organizations the Military Intelligence and the ISI culpable of indulging in activities over and above the call of duty and publicly castigating them; the current Army Chief’s outburst in the defence of the institution he heads; has led to a collision course between two pillars of the state, the Army and the Judiciary. In all fairness, if there is any good to come out of the Supreme Court commission, it will hopefully be to lay the above recounted myths to rest, rather than settling scores.
(By S. M. Hali)