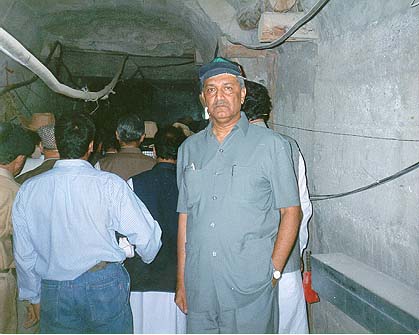 Brave personnel of Pakistan Air Force and Pak Army’s Special Service Group (SSG) of Commandoes foiled the assault on Kamra Base on August 16 by killing all the terrorists who were disguised in security forces’ uniform, equipped with latest guns and rocket launchers.

Unlike the past wars between two state actors, in the present era, rival countries employ lethal and non-lethal weapons such as suicide attacks, bomb blasts, targeted killings, and other tactics of guerilla warfare including a deliberate propaganda campaign in order to achieve their desired goals. Double game is also being played in this respect. As part of the new warfare, these tactics are being employed by the US, India and Israel to ‘denuclearise’ Pakistan.

The terror attack at Kamra Base coincided with the statement of US Defence Secretary Leon Panetta who said on the same day, “There is a danger of nuclear weapons of Pakistan, falling into hands of terrorists.”

Panetta’s misperception was also shared by a baseless report, published in the New York Times on the same day, which said that suspected militants attacked a major Pakistani Air Force base where some of the country’s nuclear weapons were considered to be stored in the early hours of the militants’ attack. The report also presumed, “The base is part of Pakistan s nuclear stockpile, estimated to include at least 100 warheads.”

Notably, US top officials have accelerated their pressure on Islamabad to launch joint military operations against the Haqqani network, based in North Waziriran. In this regard, on August 15, US State Department spokeswoman stated that the US was in talks with Pakistan and Afghanistan on joint action against Haqqani group. Besides, a recent report of The Telegraph, quoting the US Secretary of Defence Leon Panetta said that “Pakistan military is planning to start an operation against militants in North Waziristan.”

On the other side, after his recent meeting with Gen. James N. Mattis, Commander US CENTCOM, on August 17, Chief of Army Staff Gen. Ashfaq Parvez Kayani categorically dispelled the speculative reporting in foreign media, regarding joint operations in North Waziristan. He reiterated, “We might, if necessary, undertake operations in NWA, in the timeframe of our choosing and requirements.” It will never be a result of any outside pressure.

Although, like the recent subversive activities in other cities of Pakistan, Tehreek-e-Taliban Pakistan (TTP) has claimed the responsibility for the attack at Kamra Base, yet this terror attempt cannot be seen in isolation.

In fact, the US, India and Israel are in collusion to weaken Pakistan because it is the only nuclear country in the Islamic World. Based in Afghanistan, these countries’ secret agencies CIA, RAW and Mossad have been supporting bomb blasts, suicide attacks, abductions, target killings, ethnic and sectarian violence in various cities of Pakistan through their affiliated militant groups in order to fulfill secret strategic designs against Pakistan. While backing similar subversive activities in Balochistan, these agencies have also been assisting Baloch separatist elements. Their agents are penetrated in militant groups such as Balochistan Liberation Army (BLA) and Jundollah (God’s soldiers). Particularly, RAW has hired the services of many Indian Muslims. Posing themselves as militants, they have joined the ranks and files of the TTP and other extremist outfits.

Pakistan’s Interior Minister Rehman Malik and top civil and military officials have repeatedly disclosed that training camps are presence in Afghanistan, and supply of arms and ammunition to the Baloch separatists and Pakistani Taliban continue by the foreign elements as part of a conspiracy against Pakistan. In this context, intermittent cross-border terrorism in Pakistan from Afghanistan’s side also keeps ongoing in wake of a deliberate propaganda against the country. However, all these anti-Pakistan developments are interrelated as US-led India and Israel intends to create unrest in Pakistan.

It is mentionable that misperceptions of American high officials and other hostile countries including their media about Pak nukes are not new ones. In this respect, when militants had attacked on Pakistan’s Naval Airbase in Karachi on May 23, 2011, US-led some western countries including India and Israel, while manipulating the situation had intensified their campaign against the security of Pakistan’s nuclear weapons.

In this regard, on May 24, last year, the head of NATO in Afghanistan, Anders Fogh Rasmussen stated that the security of “Pakistan’s nuclear weapons has become a matter of concern, the day after the worst assault on a Pakistani military base.” On May 25, Indian Defence Minister AK Antony also stated that India was concerned about the safety of Pakistan’s nuclear arsenal.

Some reliable sources suggested that there is solid evidence that RAW had conducted terror-attack at the Karachi naval base with the tactical support of CIA and Mossad.

Particularly, US is playing a double game with Islamabad by employing shrewd diplomacy. In this context, in 2009 when the heavy-armed Taliban entered Swat, Dir and Buner, on April 23, 2009, US Secretary of State Hillary Clinton had stated that Pakistan’s nuclear weapons could fall into the hands of terrorists. But when Pakistan’s armed forces ejected the Taliban insurgents out of the affected areas by breaking their backbone, then American high officials including Ms. Clinton had admired the capabilities of Pak Army.

During his recent visit to the US, DG of the Inter-Services Intelligence (ISI) Lt. Gen. Zaheerul Islam emphatically told the CIA Director David Petraeus to end predators’ strikes on Pak tribal areas, which are counterproductive.

Besides, Pakistan’s Foreign Minister Hina Rabbani Khar and ambassador to the US, Sherry Rehman repeatedly pointed out that Pakistan and America would resume broader talks on other issues, especially drone attacks in the wake of an agreement to reopen NATO supply lines to Afghanistan. While, Hillary Clinton and Leon Panetta have repeatedly stated that America wants stability in Afghanistan and Pakistan, and their country needs Islamabad’s help for this purpose. They also remarked that the US seeks Pakistan’s assistance for withdrawal of NATO troops from Afghanistan, which will commence in 2013 and will be completed in 2014. These forces will adopt Pakistani route for the exit strategy. US top officials, especially Ms. Clinton also requested Pakistan to play its role as a facilitator for peace deal with the Afghan Taliban.

However, all this shows American duplicity with Islamabad because quite opposite to positive statements of its top officials and expectations from Islamabad, CIA-operated unmanned aircraft killed more than 22 people in North Waziristan on August 18 and 19.

US aims behind such strategy is to provoke the tribal people against the Pakistani government, causing more recruitment of militants in FATA, and more subversive attacks inside the country and assaults on the security forces. Another purpose is also to create a rift against the civil and military rulers on one side, and opposition including religious parties on the other.  In the recent past, Pakistan’s political and religious parties conducted rallies and processions against the resumption of NATO transport routes, especially drone attacks.

Nevertheless, at this critical juncture, when US and Pakistan are repairing their damaged relations by resolving other issues, without bothering for public backlash against the drone attacks, America has itself been weakening this country.

Now, under the pretext of Talibanisation of Pakistan and lawlessness in the country, which has been accelerated by the CIA, RAW and Mossad, US wants to show to other western countries that militants can possess Pak nukes. It seeks to compel Islamabad to hand over its nukes to the US. Therefore, it is preparing ground to ‘denuclearise’ Pakistan by propagating in the world that Pakistan’s nuclear weapons are not safe.

In response to US-led continued propaganda, Pakistan’s military and civil leadership has repeatedly pointed out that Pak nukes are fully secured and are under tight security arrangements.