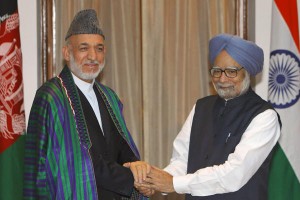 Post-2014 situation in Afghanistan after the withdrawal of US, NATO and ISAF has been the most vexing debate in recent times. United States urge to end Afghan war is a very intricate problem. The war in Afghanistan is far from over and dream to secure peace in the region is on its way. Americans are evacuating the country after 12 years and idealistically labeling it as their victory but in real terms, is it a victory for US? Much more horrific and worrying thing is the recent visit of John Kerry to the region annoying Pakistan and giving India an upper hand by saying that India could play “Central Role” in Afghanistan elections and in settling the ongoing disputes to create peace.

This statement of Senator Kerry hardly shows that if Pakistan has had any central role to play in Afghanistan, post withdrawal of American forces from the war torn region? Afghanistan is an important traditional security numerator for India and Pakistan. India has always regarded political upheavals in Afghanistan as its internal affair. A robust Indian role in Afghanistan should serve to advance other U.S. foreign policy objectives as well. In its efforts to gain greater access to Central Asian energy markets, for example, Delhi will need to develop an effective trade and transportation infrastructure in Afghanistan to connect with the Central Asian Republics (CARs), particularly Turkmenistan, Uzbekistan, and Kazakhstan. This will, in turn, reduce China’s influence in South and Central Asia an objective that both Washington and Delhi share.

India is not an immediate neighbour of Afghanistan having no geographical, religious or ethnic linkages. Giving India a window of opportunity in the post-2014 withdrawal will have serious implications for the region instead of bringing peace. Pakistan needs to be cautious of India’s role in Afghanistan. So Pakistani sensitivities regarding India should be kept in mind. If U.S keeps on muddling the situation like this then bringing peace in the region seems to be even far from difficult. Despite treating Pakistan like a banana republic. United States has to portray its policies in the region which should be aiming to strike a balance between India and Pakistan, until and unless both Pakistan and India resolves their major disputes. So there is a need for realization among the international community that Pakistan has a greater role in the war-torn country and always tried to make a positive contribution. Also it is believed that in South Asia, Pakistan is a linchpin in rooting out terrorism from the region, and the US cannot succeed without Pakistan. Therefore, both the countries fighting common war against terror should not give inflammatory statements against each other. In order to that effect for the completion of the peace process Pakistan had released Afghan prisoners that were potentially helpful in extending the process of national reconciliation.

Also recently FO spokesman Aziz Chaudhry told in an interview:” Pakistan wants to see a peaceful, united, prosperous and stable Afghanistan. To the end Pakistan has been making constructive contributions. In this regard on December 04, 2010 Pakistan had also declared its foreign policy objective of supporting all peace initiatives which are Afghan owned and Afghan led and based on intra-Afghan dialogue of all ethnic groups. There are many statements of Pakistani leaders and officials that highlight Pakistan’s sincerity towards achieving peace in Afghanistan. As published in tribune dated April 19, 2013 foreign office spokesperson Aizaz Chaudhry in his weekly briefing said, “ We are convinced that peace, stability and reconciliation in Afghanistan is in Pakistan’s interest.” He further added that Pakistan will facilitate the peace process in Afghanistan in every possible manner despite Afghan President Karzai’s lack of trust in Pakistan. A peaceful and stable Afghanistan is essential for the peace and prosperity in Pakistan. So U.S has to re-orient its policies and must understand that the end of this war will be very uncertain and it would be a grievous mistake by keeping aside Pakistan’s role in the post-2014 withdrawal and favouring India against it.