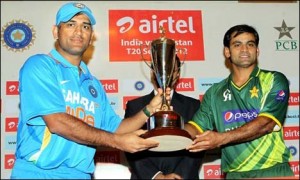 BANGALORE: Pakistan and India will play their first T20 match on Tuesday as cricketing ties between the South Asian neighbours resume after the Mumbai attacks.

The Pak-India series consists of two T20s and three ODIs and the captains of both teams have said spectators will get to see some good cricket. The T20 match will begin at 6:30 PM (PST) while the second T20 match will be played in Ahmedabad on December 28. Pakistan Team is being considered more favourit . According the public pulse Pakistan is going to win due to her strong spin attack and good bating side. Indian gamblers have also been activated to bribe Indian players against Indian interests.