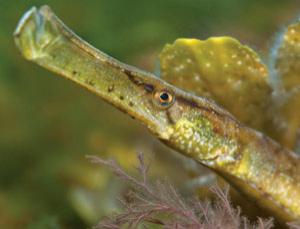 MALE pipefish pregnancy may suit the females, but it’s a real boon for their offspring.

In human fetuses, antibodies from the mother’s egg and others that pass across the placenta help build its developing immune system. Sperm are too small to carry antibodies, so males aren’t thought to contribute.

Not so in pipefish, where the male carries the pregnancy. To see if the immune priming might come from both the mother’s egg and via the father’s placenta-like structure, Olivia Roth at the Helmholtz Centre for Ocean Research Kiel in Germany and colleagues exposed lab-grown male and female broad-nosed pipefish to dead bacteria. The fish were then left to mate and the resulting offspring were later also exposed.

The young had the strongest immune response if both parents had been exposed to the bacteria, suggesting both provided antibodies (The American Naturalist, doi.org/jrq).

Pipefish may not be the only fathers that help build their offspring’s immune system. Pigeons of both sexes have been shown to “lactate” antibody-rich “milk” in their crops for their chicks.