U.S. examines Afghanistan option that would leave behind 3,000 troops 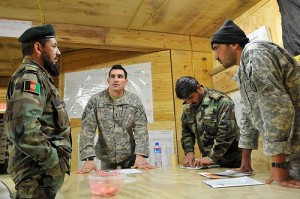 One of the four options President Obama is considering for a U.S. military presence in Afghanistan beyond this year would leave behind 3,000 troops, based in Kabul and at the American installation at Bagram, U.S. officials said.

Military commanders have recommended 10,000 troops, with more installations across the country. But the military has spent the past several months studying what kind of reduced counterterrorism and training operations it could conduct under the smaller option, which some in the White House favor.

Defense Secretary Chuck Hagel plans to brief his NATO counterparts in Brussels this week on the status of U.S. decision making. A senior administration official said that no announcement of specific troop numbers was planned but added that “we’ll have to tell people where we stand in our thinking and planning.”

During a December visit to Kabul, Hagel suggested that the late-February NATO meeting was a “cutoff point” for Afghan President Hamid Karzai to sign the bilateral security agreement that sets the terms for a post-2014 U.S. presence. Although the accord was finalized in the fall, Karzai has since refused to sign it, leaving the administration to delay its decision on numbers while threatening a complete pullout when the last combat troops leave at the end of the year.

“Nothing’s changed about our desire to get . . . [an] agreement, because without one, we’re going to have to start planning for a complete withdrawal,” Rear Adm. John F. Kirby, a Pentagon spokesman, said Thursday.

Conversations with Karzai about the agreement have largely ceased, one U.S. official said. “We’ve taken the position that we shouldn’t harass him anymore, because it doesn’t get us anywhere,” the official said. Instead, administration officials are in close contact with leading candidates for Afghanistan’s April election to replace Karzai, all of whom have said they would sign the agreement.

Under the 10,000-troop option, U.S. forces would remain in Kabul, Kandahar, Bagram and Jalalabad until the end of 2015, with 5,000 NATO and other international troops based in the northern and western parts of the country as part of a NATO mission called Resolute Support.

A second option would base a somewhat smaller number of U.S. troops in Kabul and Bagram until 2016, with authorization to travel across the country to train and advise Afghan forces as needed. Under the proposals, Option 1 could merge into Option 2, with the entire force scheduled to leave by the end of Obama’s term in office.

The 3,000 troops under Option 3 would be restricted to Kabul and Bagram, according to officials who spoke on the condition of anonymity about administration decision making. A portion of the existing Bagram air base ideally would be available for military drone operations, but troops would not travel across the country. It could not be determined how long the troops would remain.

The fourth and final option calls for a complete U.S. withdrawal, a prospect for which the White House sees little immediate political fallout. Washington Post polls have shown that a majority of Americans believe the war was not worth fighting — 66 percent in a December survey. A Gallup poll this month indicated that for the first time since the conflict began in 2001, the number of Americans who believe U.S. military involvement in Afghanistan was a mistake is equal to the number who say it was not.

One of the issues to be discussed with NATO is whether countries that have agreed to contribute troops to a post-2014 Afghanistan mission — primarily Italy and Germany — would be willing to do so with a more numerically and geographically restricted U.S. force. They have said they have no interest in staying if there is no U.S. presence at all.

The Pentagon, the State Department and the intelligence community have told the White House that anything short of Option 1 will severely circumscribe their plans for post-2014 operations in Afghanistan. “The only people interested in the low numbers are in the White House,” the U.S. official said.

Without U.S. and NATO troops based outside Kabul, the State Department has said, security conditions will probably not allow the monitoring of aid projects and the tracking of other nonmilitary assistance programs.

The military also provides security for CIA operations outside the capital, particularly in the eastern part of the country where al-Qaeda and other militant groups circulate and cross the border from bases in Pakistan. The CIA handles all human intelligence sources for its operations in Afghanistan and those related to its drone attack program in Pakistan, and some of those operations would have to be turned over to the military or discontinued under all but Option 1, officials said.

The continuation of the drone campaign in Pakistan, significantly reduced from recent years, is also awaiting a decision. Under guidelines signed by Obama in May, attacks on Pakistan-based Afghan militants such as those in the Haqqani network were authorized as a force protection measure for U.S. troops in Afghanistan. Once the troops are gone, it is unclear whether non-al-Qaeda militants in Pakistan will continue to be targeted — assuming airstrips are available for U.S. drone use.

In a Congress-commissioned study released Thursday, the Center for Naval Analyses concluded that “international enabler support will be essential” until at least 2018 if Afghan security forces are to hold their own against an anticipated Taliban resurgence.

Even with strong U.S. and other support, the study said, “the Taliban insurgency will become a greater threat to Afghanistan’s stability in the 2015-2018 timeframe than it is now.”

The study advocates keeping the size of Afghan forces at a level only slightly less than their current 382,000, rather than the 228,500 proposed by NATO. The larger force, the study said, would cost up to $6 billion a year at least through 2018, far more than the $4.1 billion that NATO has agreed to finance, assuming the security agreement is signed.

If all of its recommendations were followed, the study concluded, “a negotiated political settlement to end the war would become much more likely in the 2019-2023 timeframe.”

Retired Marine Gen. John R. Allen, who commanded U.S. and international forces in Afghanistan until last February, compared the danger of U.S. withdrawal to what happened when the Soviet Union pulled its forces from Afghanistan in 1989.

The Soviets initially left advisers and funded the Afghan military, Allen said in remarks at the Stimson Center on Friday. But the dissolution of the Soviet Union soon afterward ended that assistance, led to the Taliban takeover of Afghanistan and “resulted directly” in al-Qaeda’s Sept. 11, 2001, attacks, Allen said.